Not all dentists wear white. Like the other monks of St Antony’s Monastery, Father Joachim’s robe is as black as his beard – or it was once. After thousands of launderings it’s turned a greenish charcoal. He was eager to show me his surgery in one of the monastery outbuildings, crammed with state-of-the-art kit: gleaming autoclave, supersonic drill, X-ray machine and infinitely adjustable chair. It was not what I expected in the Egyptian desert, but a monk’s work is not only prayer.

His patients are the other fathers and noviciates, he tells me, as well as the soldiers stationed invisibly in the desert nearby, and the Ma’aza camel-farmers of the vast Wadi Araba on whose edge the monastery stands. ‘There are very few dentist-monks,’ he feels it necessary to add. He trained in Cairo, 160 kilometres north. Unimaginable, the city’s fury, in this place of such abject quiet. It is as we sit in his waiting room, drinking tea, that he gives me directions to St Antony’s sister monastery, St Paul’s, fifty kilometres’ hike away on the other side of the mountains that tower over St Antony’s.

Over the two weeks I’ve been living at St Antony’s, in the Eastern Desert between the Nile and the Red Sea, I’ve got used to the routine of holy offices and mealtimes, even if, as a foreigner, I’ve continued to feel like a bewildered imposter during the liturgy. I’ll be sorry to leave, but in doing so I’ll be making a journey I’ve been thinking about for years. 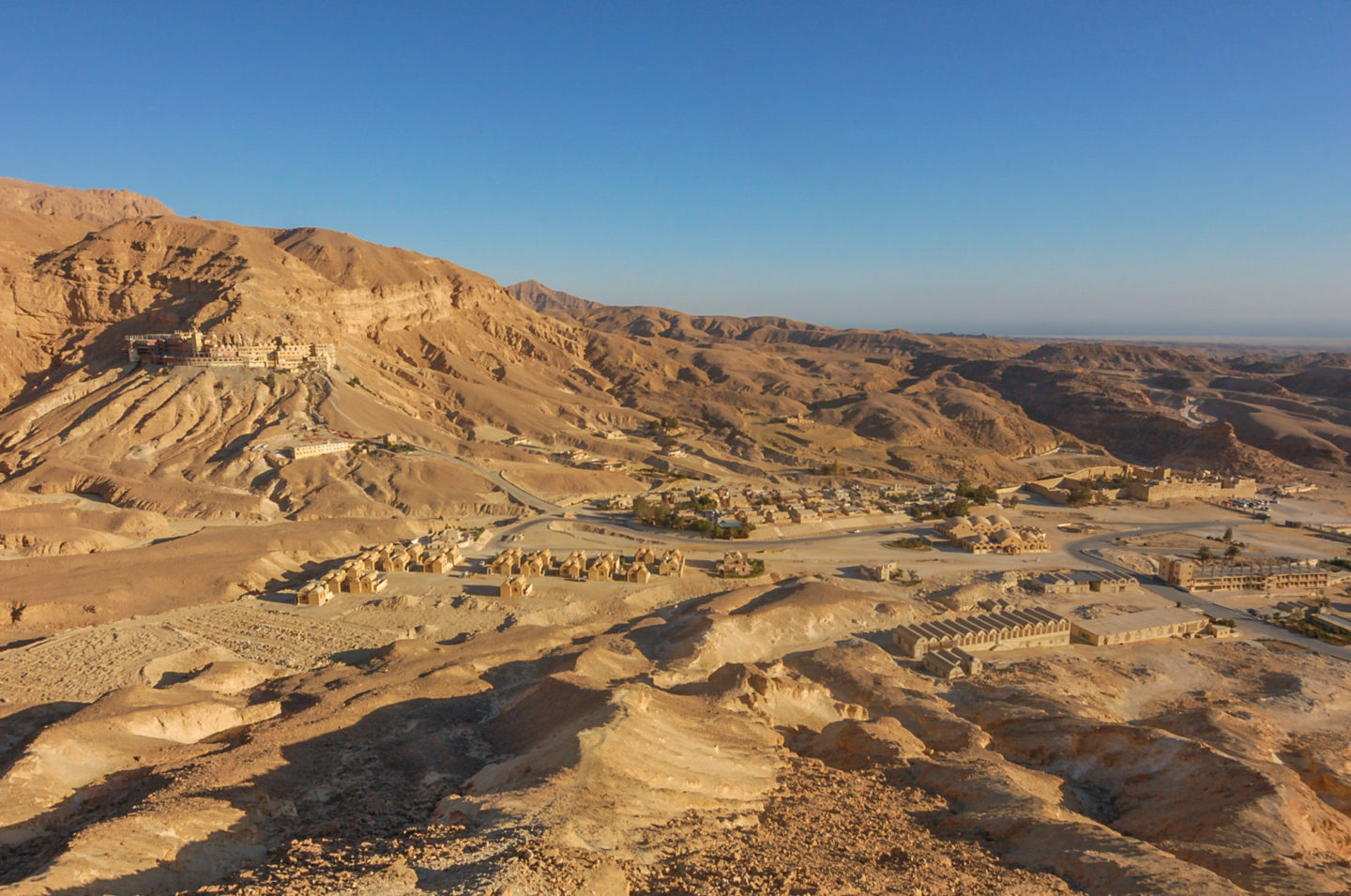 The Copts are the ancient Christians of Egypt, representing about 10 per cent of the country’s population. In the third and fourth centuries, thousands of so-called Desert Fathers (there were some Desert Mothers, too) abandoned the towns and cities of the Nile for the paneremos, the ‘inner desert’ – partly to escape society, partly in flight from the religious persecutions of Alexandria’s Roman rulers. Gradually, in the interests of security and practical necessity, these individuals in their scattered cells coalesced to form communities – the prototypes of today’s Christian monasteries. Their common ancestor and paradigm was St Antony, ‘the Star of the Desert’, who settled here some 1,700 years ago. The monastery was established within a century of his death. As St Jerome tells it, after many years Antony received a vision: ‘It was revealed to him that there was deep in the desert another better by far than he, and that he must make haste to visit him.’ He was aided by a succession of guides: a ‘Hippocentaur’, a faun, finally a she-wolf, which led him to the cave where St Paul lived, and where the monastery I’ll be walking to now stands.

There are two routes, Father Joachim explains: the first takes you over the mountain; the second, much longer, is the one the elderly Antony took. It skirts the highest peaks, following a network of wadis (dry ravines) before climbing the ridge above St Paul’s. He warns against the first way at this time of year – too windy, and too easy to get lost.

There are no good maps of the region – the best I’ve come across was drawn by British military surveyors in 1891. You’d trust it at your peril.

There are no good maps of the region – the best I’ve come across was drawn by British military surveyors in 1891. You’d trust it at your peril. A few years ago, an American expat who’d set out to walk between the monasteries alone was found too late, having lost his way and run out of water. Only the Bedouin of the Eastern Desert, the Ma’aza, know the mountains, and as a foreigner it is prudent to at least get their consent before setting out. Moussa, an English-speaking Coptic guide, is recommended to me by a friend in England. He contacts Mussalem, a member of the Ma’aza, and Mussalem’s cousin, Khaled. The journey will take us two days. Khaled will transport our luggage, and our food and water for the second day, meeting us at our campsite.

I attend matins for the last time before saying farewell to Joachim and the other fathers; the Litany of the Travellers is recited: ‘Straighten all their ways, whether by sea, rivers, lakes, roads, air, or by any means, that Christ our God may bring them back to their own homes in peace . . .’ Moussa, when we meet outside the monastery gates, is boisterous and obliging, with the slightly guarded air of liberation you find in new fathers away from home. I’m his first client in months, Egypt’s tourist industry being moribund following the war in neighbouring Libya and the bombing of a Russian airliner flying from Sharm el-Sheikh. Mussalem, a foot shorter than Moussa, scarcely speaks, and is always ten metres ahead, navigating the boulder fields with such ease he might be levitating.

After lunch under a solitary acacia – the only vegetation above knee-high we’ve seen all day – a narrower wadi leads into the mountains. There is a feeling of containment after the openness of the plain. Containment and the relief of shade. During his own walk, St Antony had to fend off all the devil’s minions, according to St Jerome’s account. The only animal life we see are two indignant finches in a wild fig tree. The valley closes in. On either side, thirty-foot walls of gravelly limestone conglomerate are carved with vertical channels where water has cascaded. Soon the wadi is in shadow. Far off, we see a Toyota Hilux approaching. We’ve walked about thirty kilometres.

Once he has lit a campfire, Khaled puts the flame of a lighter to a plastic water bottle then carefully tears off its funnelled top. He pushes one of the monastery’s candles into the coarse sand of the wadi floor and fits the half-bottle over it, mouth first, to serve as a wind-baffle. He repeats this with our remaining empty water bottles, so that when the candles are lit our camp is surrounded by flickering, crystalline cones of light.

For Moussa, as a Copt, our journey is in the nature of a pilgrimage, he explains as we eat. In the past year alone terrorist attacks on Coptic churches in Cairo and elsewhere by ISIL or its affiliates have left more than a hundred worshippers dead. Last May a minibus carrying pilgrims travelling to another desert monastery was ambushed and twenty-eight murdered. Among Copts, the sense of the monasteries as bastions of a besieged faith has seldom been more potent.

It’s about three hours later when I’m snapped awake. I blink and the valley walls are ablaze in shifting, rocking yellow light. Mussalem, Moussa and Khaled sit up as headlights dazzle us and a rusted Toyota Hilux skids to a halt yards from our camp. There’s a moment’s silence. A door slams. Moussa is kneeling in his sleeping bag, one hand visored on his brow. I feel strangely calm – they say the desert encourages fatalism – but Mussalem is up and shouting. The headlights are switched off and there is a scuffing of feet.

‘Who are you?’ Mussalem is demanding in Arabic. ‘What are you doing on our land?’ They don’t answer; another door slams, and one of the men shouts back: they’re Ma’aza from another clan, looking for a herd of absconded camels.

The two men have tea with us before returning to their truck. The engine-growl withdraws and the night is returned to quiet, and I register a sound that is familiar to me now: the deep, mysterious internal piping that we call silence: blood in movement, or the generation of cells, or some discreet regularising of aural pressures.

I wake to the murmuring of prayer: Mussalem kneeling on his rug on the rocky ground as orange sunlight touches the summits. In the slot of sky above there are yellow-grey clouds.

After breakfast we say farewell again to Khaled, whose vehicle can go no further, and follow Mussalem along crumbling limestone banks above what, in times of flood, would be an immense staircase of waterfalls. It’s two years since the last flash floods, Mussalem says, looking at the massing clouds. In the pit of every dry waterfall is an island of acacia and tamarisk. From a wild fig tree I pick a fruit no bigger than a cherry: velvety soft, pale green. Its bitterness lingers for the rest of the day.

Towards noon, as we continue to climb, there’s a sense of approaching a precipice or a summit. A new expansiveness to the light. Moussa shouts back at me, grinning, but his words are inaudible. A single step higher and the wind hits me, snatches my hat and frisbees it into the valley behind us. On the other side is the Red Sea coastal plain, and fifteen kilometres away the thin blue line of the Gulf of Suez and beyond it the mountains of Sinai. Nestled in the foothills far below us is a grid of limewashed buildings within a defensive wall. The guard at St Paul’s is surprised to see anyone approaching from this direction. He unlocks the gate and shows us to a spring trickling from the rock. I dip a tin cup and pass it to Mussalem; he drinks and passes it back. The water is sulphurous, but sweet enough. We stay there for ten minutes, the three of us, dipping the cup and passing it back and forth.

The Immeasurable World: Journeys in Desert Places by William Atkins is out 7 June 2018. 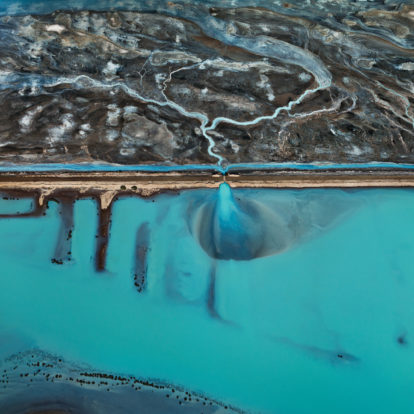 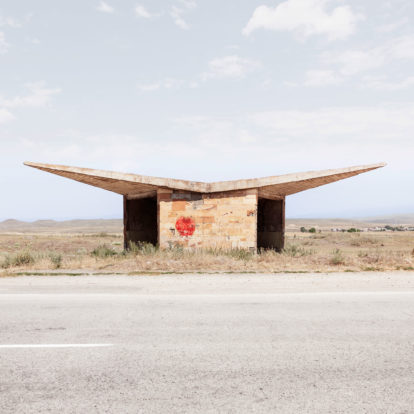 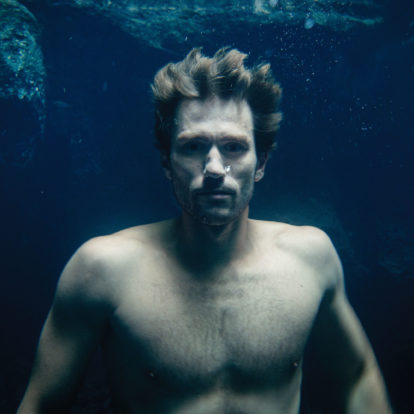 Three-time world record-breaking freediver Guillaume Néry ranks Neil Armstrong among his heroes. He talks about the joys of defying gravity and his quest for the perfect dive. 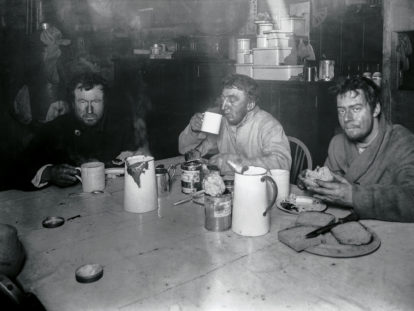