The Swiss astrophysicist Fritz Zwicky was habitually stubborn and difficult. Like his contemporary, Albert Einstein, he was not afraid to contradict the textbooks but, whilst working in his lab at the California Institute of Technology, it was his grumpiness that was most pronounced. Despite this, Zwicky’s long-suffering colleagues put up with him because he was working on a problem. A big problem. In fact, one so big it took up most of the universe.

Zwicky had been studying galaxy clusters using CIT’s telescopes. Everyone knew the clusters were the biggest objects in the universe but Zwicky’s calculations suggested they were much, much bigger than they looked.

That didn’t make sense. According to the literature, all matter in the universe was observable, either by the naked eye or through a powerful telescope. But Zwicky’s calculations showed that the galaxies in one cluster had a mass hundreds of times larger than what was visible. 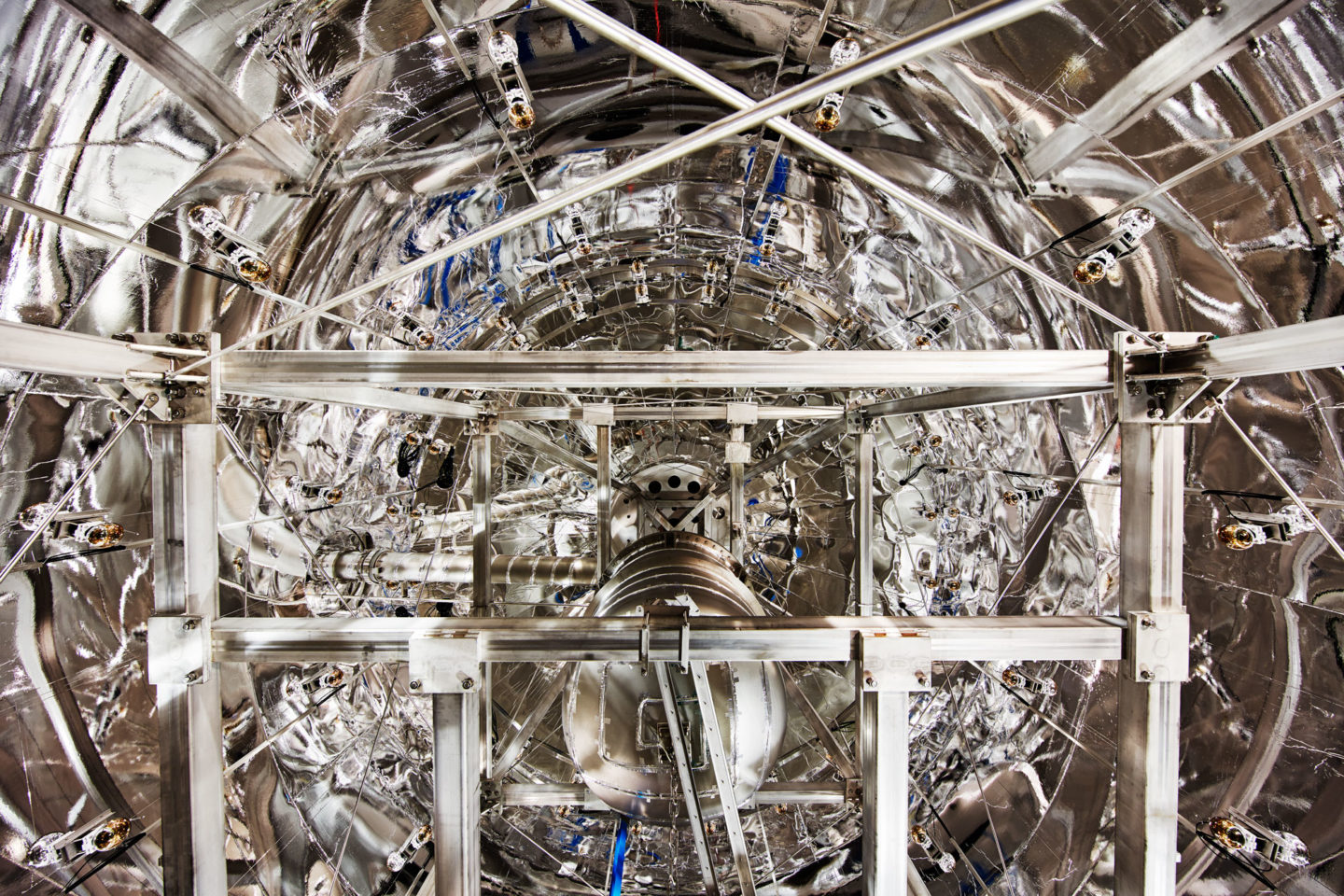 Bottom view of the cryostat.

Stubbornly refusing to accept the anomaly, Zwicky went back to his books. In a stroke of genius he came up with a possible answer. The extra mass must be unseen: it must be invisible, or ‘dark’. And so, in 1933, Fritz Zwicky discovered (or rather, inferred the existence of) dark matter.

Almost 85 years on we know remarkably little about dark matter. Thanks to Zwicky, scientists are confident it exists and that it makes up 80 per cent of all matter in the universe – in fact it is streaming through you as you read this. But no one can find it.

What is the universe made of?

XENON1T hopes to change that. The third phase of XENON, a project based at the famous Gran Sasso National Laboratory in the mountains outside Rome, is the biggest and most sensitive dark matter detector ever built. Like several rival experiments, XENON1T aims to find dark matter on Earth.

“The holy grail is to be first,” says project founder and leader, Professor Elena Aprile of Columbia University in New York, “and this is the time to dance.”

To understand her excitement, and the fundamental importance of XENON’s work, it is useful to get an idea of what the team is dealing with. Scientists used to believe, as Zwicky’s journals told him, that all matter could be seen, whether it was a picture on a wall, a mountain or a distant star. Even air and other invisible gases could be detected using simple equipment. Everything was made of something, and almost always atoms from elements such as oxygen, carbon or iron. Where nothing existed, there was a vacuum. 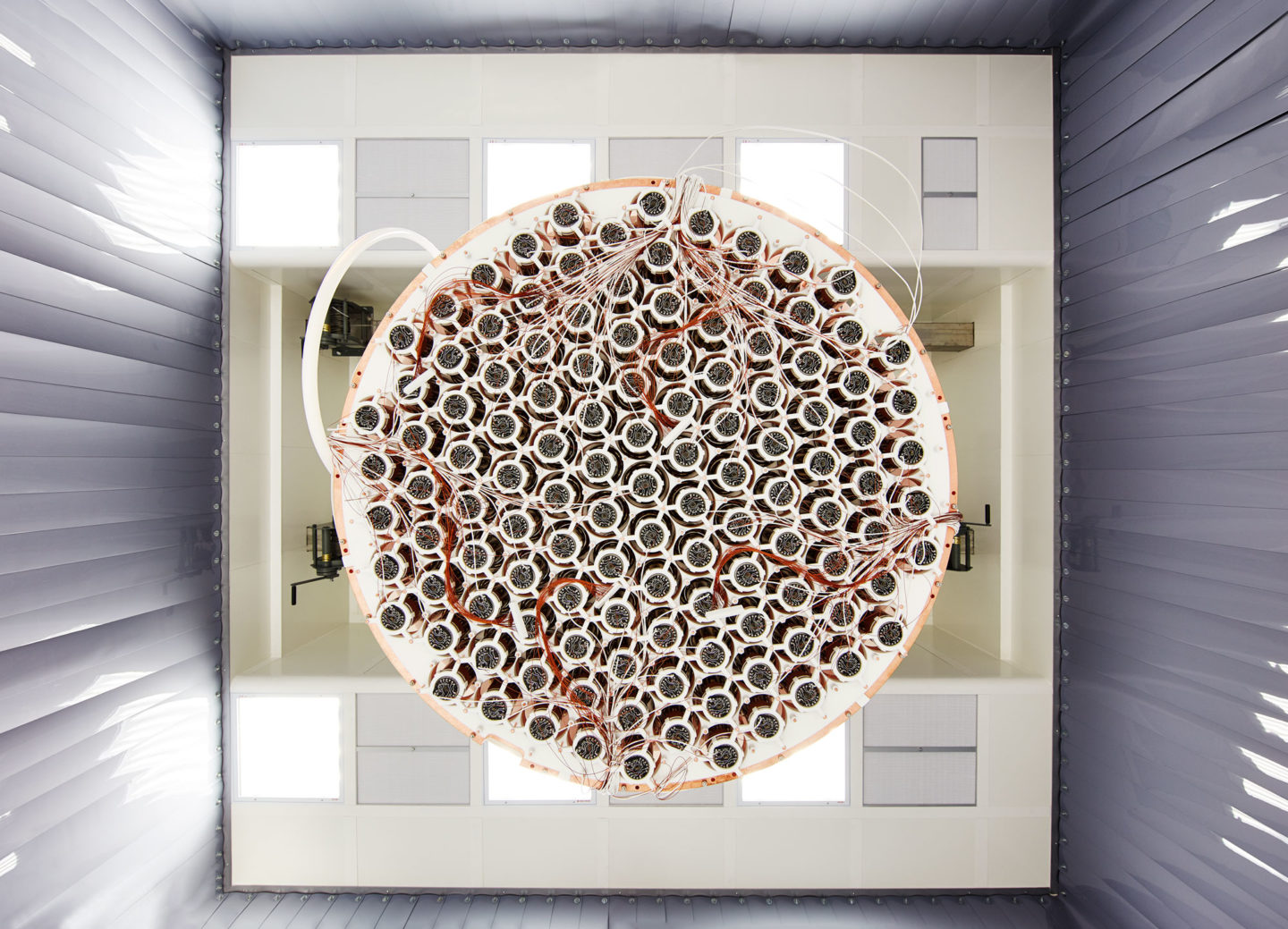 Bottom view of the XENON1T Time Projection Chamber. The photo shows one of the two photomultiplier arrays that will read out the scintillation light produced by interactions in the liquid xenon volume.

So why can we not see it? Dark matter does not emit or absorb light or energy, like everything else that we can detect with technology today. But scientists believe it must exist because nothing else can explain why galaxies are so. And because, without it, the universe would fly apart.

Yet developing knowledge of the big bang changed all that. This great explosion that formed our rapidly expanding universe is now known to have created not just the building blocks of atoms, but also dark matter and another puzzling phenomenon: dark energy. 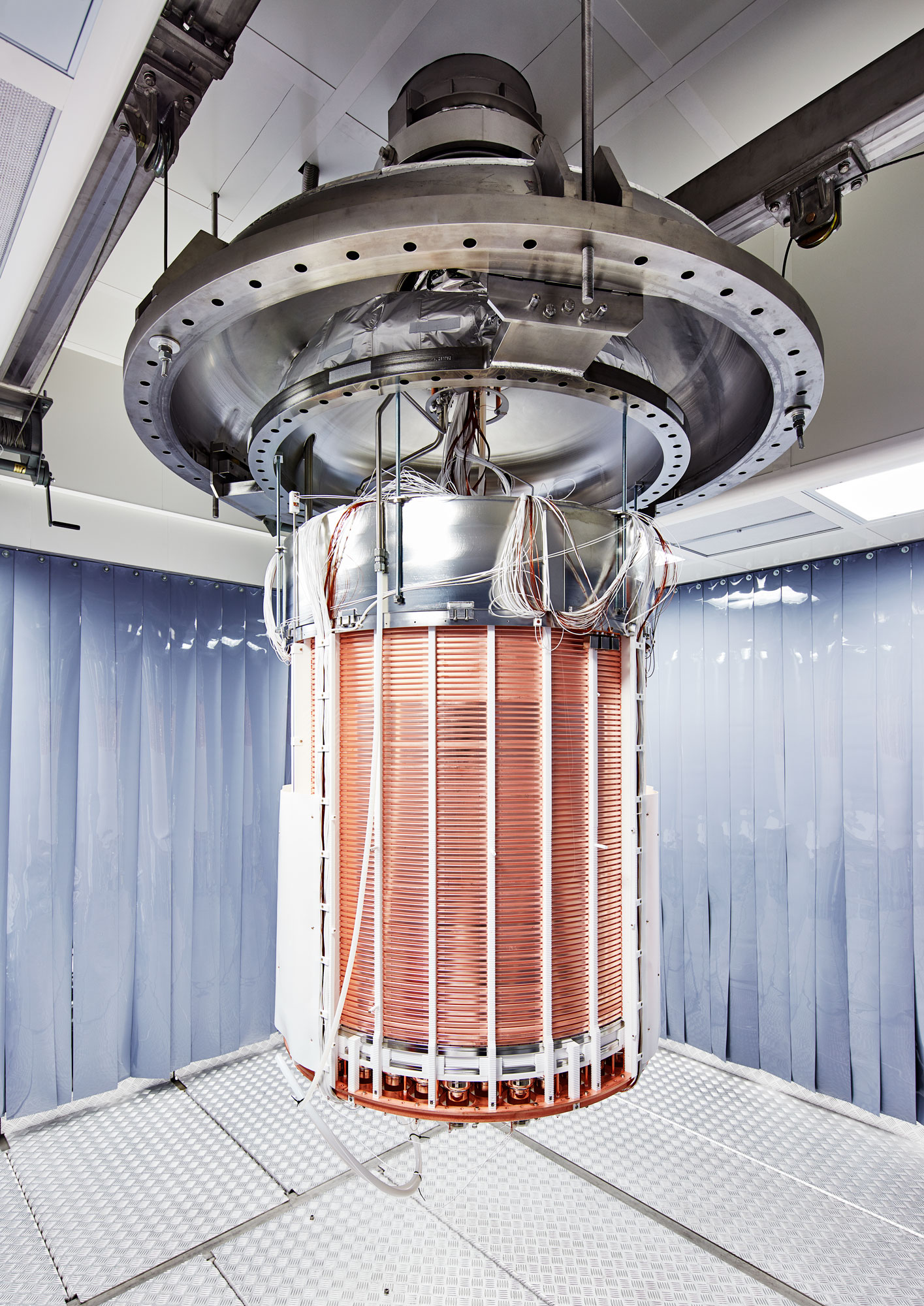 The XENON1T Time Projection Chamber during its assembly in the cleanroom. This is the core detector designed to be sensitive to possible dark matter interaction with liquid xenon.

Some scientists think dark matter is simply an undetected form of baryonic matter, but the favoured theory now is that it is composed of a type of non-baryonic matter called ‘weakly interacting massive particles’, or WIMPs. These have more mass than the three fundamental atomic particles (protons, neutrons and electrons), but their weak interactions with ordinary matter, such as the human body, make them difficult to find with current technology. Finding dark matter would have fundamental implications for science. It could help to further unravel the mysteries of the big bang, explain how galaxies stick together and finally reveal what our universe is made of.

The XENON1T experiment is therefore at the cutting edge of particle physics. The theory behind it is fairly simple: dark matter is everywhere and so must be interacting with normal matter; therefore it should be possible to capture an example of, say, the passage of a WIMP through a medium. 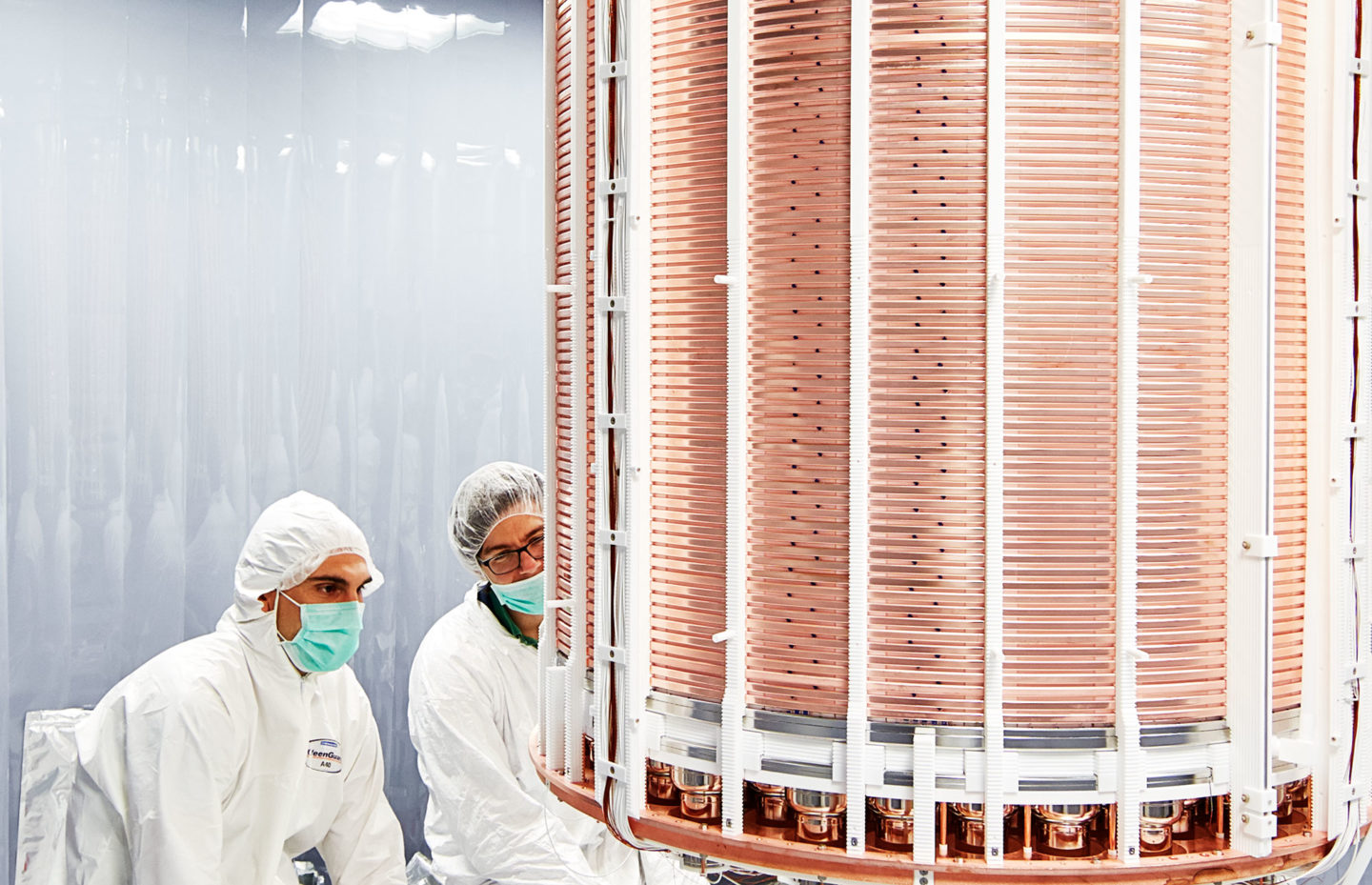 The XENON1T Time Projection Chamber during the last phase of its installation in the cleanroom. Scientist are checking the last details before its insertion in the cryostat.

The reality is more complicated. As the ‘weak’ in WIMP suggests, any interaction is likely to be very difficult to detect, but the more sensitive the recording equipment, the more likely it is to pick up misleading signals.

As with its two earlier, smaller experiments, XENON1T will attempt to record the light produced by the collision of WIMPs with a vat of cooled liquid xenon. Xenon, which exists as a gas at room temperature, is used because its large atoms provide a big target for WIMPs, and because when over -100ºC it is very dense.

This density acts as a shield against unwanted interactions, for example from background radiation and the equipment itself. Additionally, the Gran Sasso lab is buried more than 1km inside a mountain which acts as a protective shell.

The Milky Way is estimated to have roughly ten times as much dark matter as ordinary matter.

With the chance of interactions with ordinary matter reduced, the theory is that some of the billions of WIMPs passing through the 3.5-ton vat at any moment will collide with a xenon atom. This should produce enough energy to cause a flash of light, captured by the ultra-sensitive photomultipliers that line the vat.

XENON1T has so far cost $20 million and is the culmination of more than 10 years of experimentation. The activation in March is merely the start of another long road, possibly involving a $10 million expansion to increase sensitivity and, according to Professor Aprile, the results, whether positive or negative, could be years in the making.

How big is a dark matter particle?

A dark matter particle is roughly forty times the mass of a proton or a single atom of hydrogen.

“The only thing you can do when experimenting is keep your mind open and prepare yourself with the best tools,” she tells Avaunt. “It’s going to be difficult to assess the true nature of the signal and we don’t even know if we’re searching in the right direction.”

If results do come, the evidence will be hotly debated by other groups looking for dark matter, such as the LUX project in the USA, the PandaX detector in China and a team trying to create dark matter particles at the Large Hadron Collider beneath the French-Swiss border. If negative, the results could convince many that WIMPs do not exist and that it is time to go back to the drawing board. 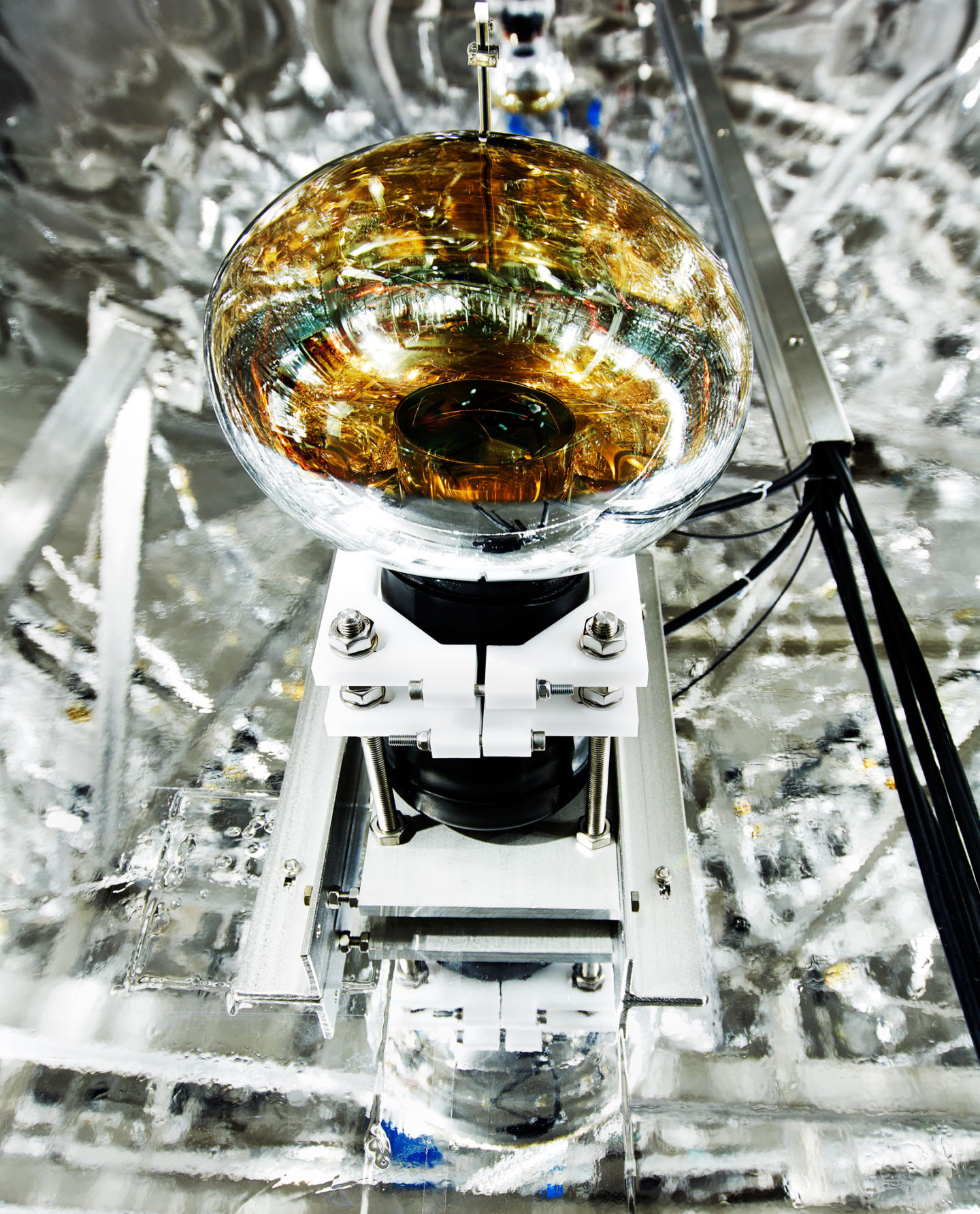 A photomultiplier of the XENON1T muon-veto detector.

No wonder Fritz Zwicky was grumpy. 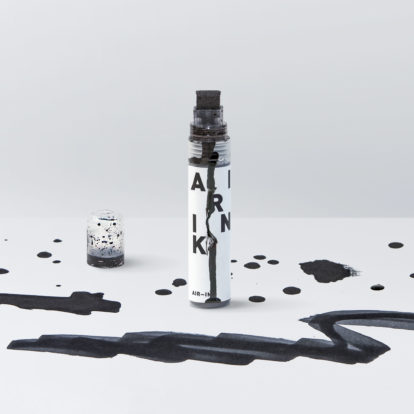 'Pollution is nothing but the resources that we are not harvesting yet' claims the man behind the concept – one of the few innovators whose ultimate hope is that his invention will become obsolete. 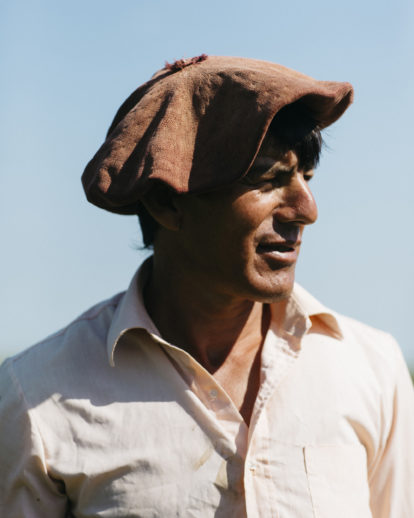 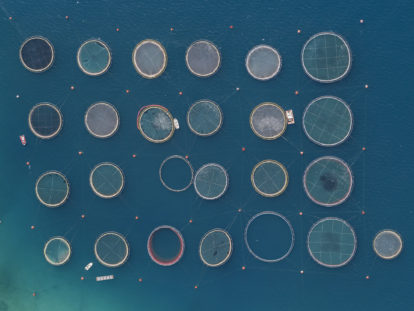 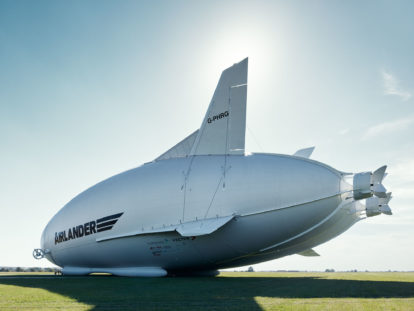 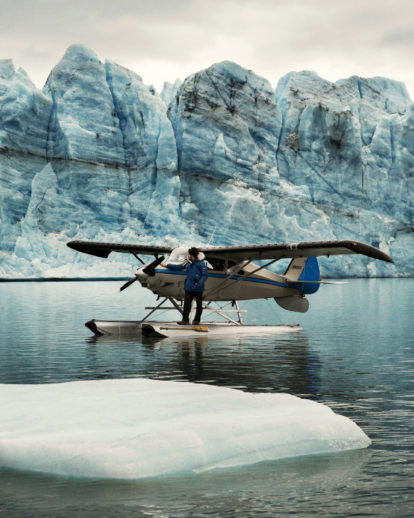 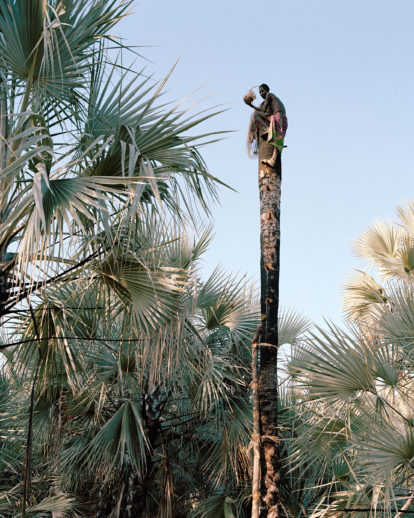